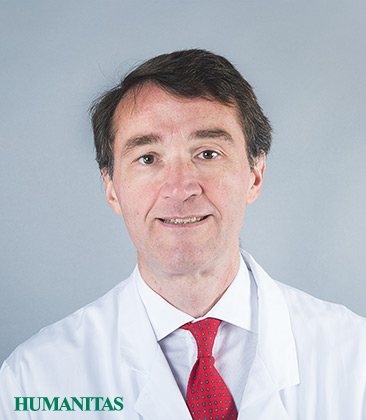 Arturo Chiti graduated in Medicine and Surgery at the University of Milan in 1989, and in the same year he entered the Post graduated School in Nuclear Medicine at the University of Milan, where he got the certification in 1993.
In the same year he started working as Associate Chief at the National Cancer Institute in Milan, where he began his clinic and scientific experience in Oncology.
In 1997, he got the European Board of Nuclear Medicine fellowship.

In June 2000 he was called to lead the Nuclear Medicine Department at the Humanitas hospital.
On March 1, 2015 he was appointed Full Professor in Diagnostic Imaging and Radiotherapy at the Humanitas University in Milan, where he is also elected member of the Board.
He is the Director of the Post Graduate School in Diagnostic Imaging at Humanitas University.
He is member of the Technical and Scientific Committee of the National Centre for Oncologic Adrotherapy (CNAO).

Arturo Chiti is co-author of several papers (www.scopus.com, www.pubmed.com) with an H-index of 30 (July 2016), wrote some books’ chapters and contributed to many abstracts presented at international and national meetings.
He is Honorary Editor of the European Journal of Nuclear Medicine and Molecular Imaging and reviewer for several international journals and grant applications.
He is a well-known invited speaker at numerous international congresses and conferences.

Arturo Chiti is the President 2015-16 of the European Association of Nuclear Medicine (EANM), where he is active since more than 10 years.
Since many years he is also acting as an expert consultant for International Atomic Energy Agency (IAEA).
He is member of the International Commission on Radiation Units and Measurements (ICRU).