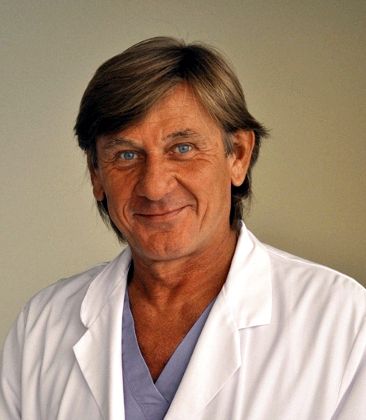 Dr. Marco Alloisio graduated in Medicine in 1976 at the University of Milan, specialized in General Surgery, Oncological and Thoracic Surgery. From 1980 to 1997, he worked at the Istituto Nazionale Tumori of Milan mainly as Thoracic Surgeon. During this period, he delt also with general surgery, breast surgery, oncological otorhinolaryngology and had several periods of study abroad (Paris and New York at the Memorial Sloan Kettering Cancer Center).

In 1997 he started his activity at Humanitas Research Hospital and in 1998 was appointed Chief of Mini-Invasive Thoracic Surgery. From 2006 he was designated Chief of Thoracic Surgery at the same Institution. Main clinical activity has been focused on Thoracic Surgical Oncology, and in particular all kinds of surgical management of primary and secondary lung cancer, lung metastases, mediastinal tumors and chest wall tumors. Marco Alloisio is president of the Italian League for the fight against cancer (Lilt) in Milan, and member of many national and international societies (SIC, SICO, ESSO, ISDE, ACOI, SICT, ESTS).

Author of over 200 publications, including articles and presentations to national and internationals scientific meetings. His engagement in clinical research involves early detection and management of primary lung cancer and his treatment also with Video-assisted techniques, successful treatment of lung metastases with new techniques for salvage surgery (multiple sub lobar resections and laser resections) but also aggressive surgery for advanced lung cancers after induction chemotherapy and treatment of chest wall and vertebral bodies.

In the latter field, he is engaged in the surgical treatment of malignant pleural mesothelioma (extra pleural pneumonectomy) with multimodality approaches in a multicentric Italian cooperative group.