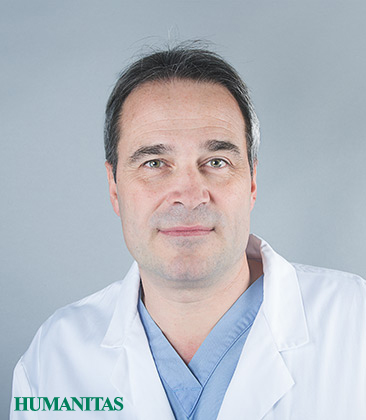 The Thoracic Surgery Unit, together with the Abdominal Oncological Surgical Unit, the Radiotherapy and the Medical Oncology Unit make up the Department of Oncology, directed by Prof. Armando Santoro, at Humanitas Research Hospital.

The Thoracic Surgery Operative Unit, directed by Dr. Marco Alloisio, deals with all the cases requiring surgery of the chest area and carries out clinical and scientific work mostly in the field of primary and metastatic tumours of the lungs. More specifically it deals with the following:

Humanitas Thoracic Surgery Operating Unit has always handled the diagnosis and surgical treatment of breast tumours as well as the treatment of all types of radical surgery including mammary resections with sentinel node biopsy, mastectomy involving the chest wall and lymph node dissection of the internal mammary system using a video-assisted thoracoscopic approach.
With the cooperation of the Plastic Surgery Operating Unit all types of breast reconstruction using implants, muscle flaps and lipofilling are performed.

Dr. Umberto Cariboni have carried out about 1000 major thoracic surgery operations by using minimally invasive techniques for lung cancer in the early stages (VATS lobectomy) and by cooperating with other departments in case of advanced stages lung tumours and of thoracic sarcomas (T4 vertebra, great vessels).