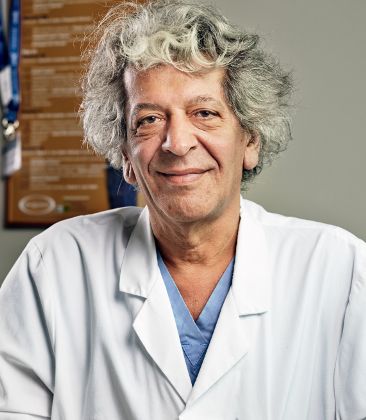 Born in 1955, Paolo Emanuele Levi Setti graduated in Medicine and Surgery at the University of Milan School of Medicine in 1982 and was board certified in Obstetrics and Gynaecology at the same University in 1988. At the beginning of his career he was involved in the early developments of ultrasound imaging in obstetrics and gynaecology and more recently in the new applications of transvaginal and colour flow technology. From 1977 to 1982 microsurgery and endoscopy were his main interest in the investigation and treatment of female infertility. Surgical applications in the animal model of new approaches to pelvic pathology were the first studies he published in literature. From 1985 to 1989 fetal blood sampling and prenatal diagnosis had a main role in his interest in research development. In this period he collaborated in many published studies in this area and one of the greatest experiences in the world was reported in the field of echographic surgery. Results of in vitro fertilization, implantation, intrauterine embryo transfer, assisted reproduction in sexually transmitted diseases, evaluation of the uterine cavity in infertile patients and cryopreservation, are the main aspects of his present day scientific interest. In 1984, together with a group of colleagues, he founded one of the first centres in Italy operating in assisted reproduction. From 1988 to 1996 Prof. Levi Setti chaired the infertility and assisted reproduction unit of the Dept. of Obstetrics and Gynaecology – S.Paolo Biomedical Institute – University of Milan School of Italy operating in assisted reproduction. He coordinated from 1989 to 1996 the first European centre for assisted reproduction for HIV serodiscordant couples. Since 1994 he is invited lecturer at the 1st postgraduate School in Obstetrics and Gynecology and he is invited lecturer in the graduate course of Obstetrics and Gynaecology – University of Milan, School of Medicine. Involved since the earliest development of endoscopy in gynaecology, he followed the evolution of this surgical approach performing, over 25 years of activity, more than 15.000 procedures and graduating an impressive number of fellows in this area. His Department has run for many years one of the largest ART programs in our country and in Europe. His research interest has, over the last few years, focused on the mechanisms of implantation, on the preservation of female and male fertility and on the complications and outcome of assisted reproduction. His Department performed the probably larger number of oocyte’s freezing procedures in infertile patients in Europe and is now a recognised expert in fertility preservation in oncological and fertility deferring patients. He has been the scientific organizer of several international meetings and training courses in Reproductive Medicine. Member of many international institutions in the field of reproductive medicine (American Society for Reproductive Medicine, European Society of Human Reproduction and Embryology, International Society for Fertility Preservation), Member of many international institutions in the field of reproductive medicine, he was elected onto the board in 1999 and in 2003 and for two mandate (2009-2001 and 2011-2013) President of the Italian Fertility and Sterility Society (SIFES e MR). He is author of more than 100 published articles, reviews and chapters in books. From 2004 Prof. Levi Setti collaborates with the Italian Ministry of Health in revising data of the National Medically Assisted Reproduction Register. In December 2010 he was nominated scientific coordinator of an experimental project for an ART Network in Lombardy County. Since 1996 Prof. Levi Setti works at the Humanitas Scientific Institute in Milan and is currently chair of the Department of Gynaecology and heads the Division of Gynaecology and Reproductive Medicine. In May 2011 he was appointed, for the period July 2011- June 2016, as Adjunct Professor at Yale University, School of Medicine. In June 2013 he supervised and is actually personally directing the Humanitas Fertility Center, where over 3.500 ART procures are annually performed.