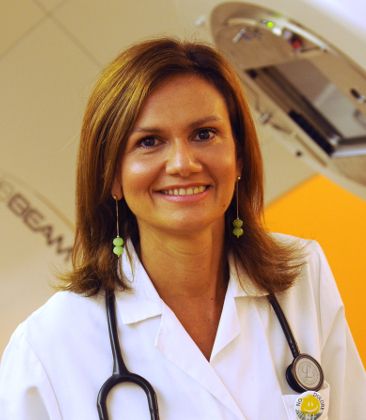 Prof. Marta Scorsetti is the Radiotherapy and Radiosurgery Unit Director in Humanitas Research Hospital. The main medical interests are: lung cancers, gastrointestinal tumors and brain tumors; integrated radiation-chemotherapy treatments and special techniques such as Radiosurgery and Stereotactic Body Radiation Therapy (SBRT).
As director of the Radiation Therapy and Radiosurgery Unit, she has continued the implementation of the most modern radiation therapy techniques, especially SBRT that allows irradiation of small lung and abdominal tumors at high doses with extreme accuracy and precision. In addition, she has contributed to the development of IMRT (Intense Modulation Radiation Therapy) and the implementation of VMAT (Volumetric Modulated Arc Therapy) that guarantees a shorter duration of treatment and permits the irradiation of smaller areas, even those in body zones that are difficult to reach because of their concavity and irregular form.
Prof. Scorsetti introduced the instrumentation for performing Adaptive Radiotherapy, which permits precise and accurate irradiation of lesions in motion, one of the first centers in Italy. Among the first centers in Europe, she subsequently implemented a new linear accelerator with high-dosage FFF beams (True Beam), working with the manufacturer to start new treatment protocols.

She graduated from Milan University in 1993 and obtained her specialization in Radiology and Oncological Radiation Therapy in 1998. Before she joined Humanitas, she was working in National Cancer Institute in Milan, Italy as consultant and specialty doctor at the Radiation Therapy Division treating primary brain tumors, at the same time, contributing to the establishment of one of the first Italian centres for Radiosurgery (Linac based), set up at the Cancer Institute of Milan in co-operation with the  Istituto Neurologico "C. Besta" (Neurological Institute).

From 1994 to date Prof. Scorsetti is a member of the Italian Association of Oncological Radiation Therapy (AIRO) and the European Society for Therapeutic Radiology and Oncology (ESTRO), author and co-author of numerous publications in national and international magazines and journals. During the period 2010-2012 she was Member of the management committee FONICAP National Interdisciplinary Task Force against lung cancer.
She has taken part in the design and creation of a prototype of a Dynamic Multi-leaf Collimator now used all over the world.