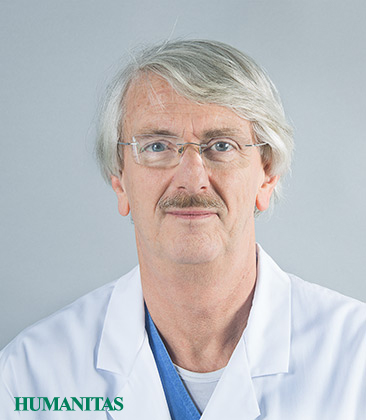 In his academic career, since 1988, he has been appointed as Contract Professor of “Techniques and Methods of Diagnostic Imaging” at the School of Radiology of the University of Milan. Previously, in his clinical activity, he worked at the General Hospital of Busto Arsizio (Milan area) as Chairman of the Department of Oncology and Head of the Division of Interventional Oncologic Radiology.

His main fields of interest have always been interventional procedures in oncologic diseases (particularly percutaneous image-guided thermal ablation), imaging of the neck and contrast-enhanced sonography. He was one of the pioneers of ultrasound-guided aspiration biopsies (1979), ethanol injection (1983), radiofrequency ablation with cool-tip electrodes (1995) and  microwaves (2009) of solid tumors and fusion imaging for the guidance of interventional procedures (2003).
With his team he has one of the largest experiences in the world in the treatment of liver malignancies with radiofrequency ablation (RFA) and, more recently, high-power microwaves, accounting for more than 2,200 patients, with technical success rates above 90% and major complication rates of less than 1%. These very favourable results have been achieved also thanks to a continuous search of technological advancements of the imaging methods for the guidance of thermal ablations and, particularly, the systems of navigation through the real-time fusion of ultrasound and CT, MRI or, more recently, PET scans.

Prof. Solbiati published 112 original articles in peer-reviewed journals as of yet http://www.ncbi.nlm.nih.gov/pubmed?term=solbiatiL

His H-index is currently 41, his impact factor exceeds 400 and his publications had more than 10,800 citations.  He holds the 2nd place in the world ranking of the Authors of the 100 papers of international radiological literature published between 1945 and 2012 with the largest number of citations (Am J
Roentgenol 2013; 201: 471-481)
In addition, he published 81 chapters in textbooks of Radiology, Interventional Radiology and Oncology and was Editor of 11 books on small-parts sonography, contrast-enhanced sonography and ablative therapies.
He gave more than 480 presentations at Meetings in 23 different countries and was Guest Lecturer at the Universities of San Diego, Zurich, Beijing, Hong Kong, New Delhi, Cairo and Vienna and at the Mayo Clinic, Rochester