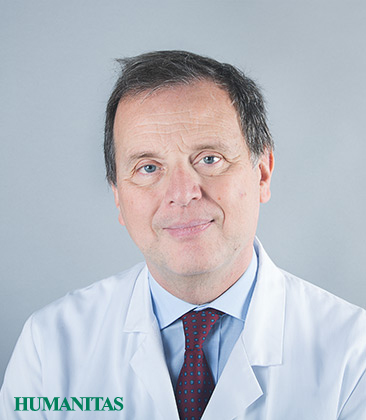 Prof. Alberto Albanese is the Neurology Unit Director at Humanitas Research Hospital. Until recently – Department Head of Neuroscience at the Institute of Neurology Carlo Besta (Milan). In 1977 prof. Albanese received his degree in medicine and surgery, in 1981 – in neurology, and in 1985 – in psychiatry. His professional experience began with the founding of the Department of “disorders of Parkinson’s and violations of the musculoskeletal system” at clinic” A. Gemelli “in Rome in 1984, which he led until 1996. From 1996 to 2000 prof. Albanese was the Head of the Neurological University Clinic of Lausanne (Switzerland) and a professor of Neurology in the University.

From 2000 to 2015 he was Head of Neuroscience Department at the Institute of Neurology Carlo Besta (Milan).

Current Teaching Activity: Prof. Albanese is a professor of neurology at the Institute of Neurology at the Catholic University of the Sacred Heart (Milan), Director of the post-graduate course “Diagnosis and treatment of movement disorders and degenerative neurological diseases” at the Foundation Neurological Institute “C. Besta”, as well as an adjunct professor at the School of Specialization in Neuroscience at the University of Milan Bicocca.

Prof. Albanese is the president of “Italian Association of Parkinson’s disease and movement disorders” and “Italian Association for the Study of the autonomic nervous system” (which are part of “Italian Community of Neuroscience”). He is also an honorary member of the “French Community of Neuroscience.” The professor is a moderator and speaker at major national and international neurological conferences, he organized several symposia dedicated to Neurology, collaborates with numerous national and international research centers, which are studying Parkinson’s disease, movement disorders and degenerative neurological diseases. Prof. Albanese has been repeatedly receiving research fundings from the following government agencies: the Ministry of Health, Ministry of Science and Research, National Research Council, the British Council, the Swiss National Research Council.

This is one of the greatest Italian experts on the diagnosis and treatment of neurological diseases and movement disorders, Parkinson.

He has extensive experience in the use of neurostimulation of brain neurological movement disorders, for treating Parkinson’s disease and other involuntary movements.

He developed the first Italian project on the study of genetic disease and Parkinson’s dystonia, which led to the discovery of two new genetic loci. Also prof. Albanese is actively engaged in research in the field of semiotics detailed definition of involuntary movements, which allows tracking of related clinical pathology for accurate diagnosis of patients with movement disorders.

Prof. Albanese has published more than 200 scientific papers, most of which are published in indexed journals (with a total impact factor> 500), is the author of one monograph, 3 books and co-author of numerous books and publications. He is the chief editor of «Frontiers in Movement Disorders» and assistant editor of the European Journal of Neuroscience.