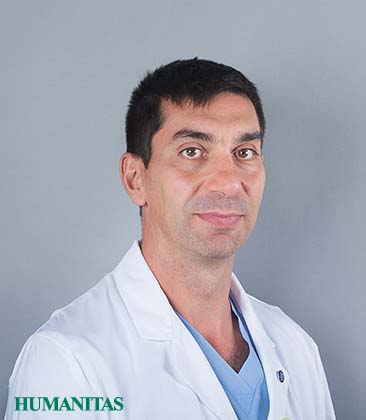 Head of the Cardiovascular Surgery I Unit

Prof. Efrem Civilini is chairman at Humanitas University and Chief of the Department of Vascular Surgery I, practicing at Humanitas Research Hospital.

He received his medical degree from the University of Milan, Italy and board-certified in Vascular Surgery at the University of Siena, Italy. He took his internship and residency in vascular surgery at San Raffaele Scientific Institute, Milan (Italy) where he completed his training with clinical and research fellowships under the guidance of his mentor Prof. Roberto Chiesa. As an attending surgeon and later as chief of Thoracic Aortic Surgery at Cardiovascular Department of San Raffaele he managed his surgical experience in an internationally recognized team treating thoraco-abdominal aneurysms and completed his formation in minimally invasive aortic surgery at the Cleveland Clinic (OH). After an experience of about 15.000 vascular interventions, in 2015 was appointed to Humanitas at the head of a relatively young team: the department of Vascular Surgery I. It provides comprehensive services for all types of vascular disorders including the new technology of catheter-based intervention as well as traditional surgical treatment all geared toward maximizing safety and optimizing outcomes.

Prof. Civilini’s research interests have focused on aortic surgery and minimally invasive vascular therapies. He co-authored practice guidelines for the treatment of patients with cardiovascular diseases and has played a role in industry-sponsored clinical trials assessing the performance of new expandable stents used to treat thoracic aorta disease. He has been invited to present his clinical experience at international and national medical conferences and symposia.