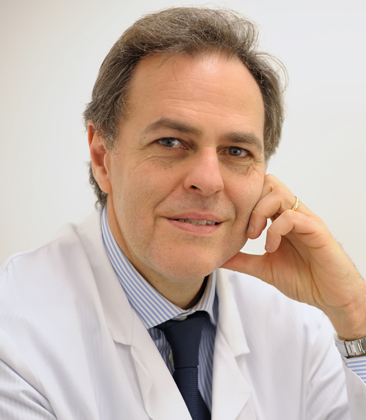 Dr. Pietro Rosetta is leading the department of medical and surgical cornea at Humanitas Research Hospital. After classical high school diploma, he graduated with honors in Medicine and Surgery in 1989 at the University of Milan and specialized in Ophthalmology at the Eye Clinic of the San Raffaele Hospital in Milan, where he helped developing the surgery of corneal transplants until 1996.

In 1990 he was awarded, in Bergamo, with the annual prize AIDO for his efforts in organ donation and retrieval of corneas.

From 1990 to 1992 he worked as assistant at the Eye Clinic of Ophthalmology Foundation A. de Rothschild of Paris directed by Prof. Danièle Aron Rosa.

In 1992, he earned at the University of Paris VII the title of Assistant stranger in Ophthalmology. Since 1997 he works at the Humanitas Research Hospital, Rozzano, since 2000 at Ophthalmology Unit directed by Prof. Paolo Vinciguerra.

Specialist in microsurgery of the anterior segment, he has participated as invited speaker at more than a hundred national and international conferences and has contributed to the development in Italy of transplantation of limbal stem cells and development of Corneal Cross-Linking, new surgical therapy for keratoconus.